Army veteran and entrepreneur Arron Barnes knows something about turning an adversity into an opportunity.

Barnes, who spent nine years in the military, had long struggled with stomach issues so he began making his own fresh fruit and vegetable juice in an attempt to ease his digestion problems. The freshly pressed juices he created made him feel better, and they tasted great. The popularity of his products at local Vancouver farmers’ markets, prompted him to start deliveries to both homes and businesses.
After the success of the juices, Barnes turned to raw almond butter to help curb his cravings for sweets — and that, in turn, became a business. In June 2016, he started the company Life Butta.

The Life Butta product line includes three flavors — original, matcha green tea, and turmeric and black pepper — each includes a healthy dose of super-foods such as chia, flax and pumpkin seeds, along with a touch of coconut sugar and sea salt. Life Butta has found modest success and their products are now sold in four retail locations around Vancouver and Portland.

But doors started opening even wider when Barnes connected with the newly opened Bunker Labs in Seattle.

Bunker Labs was created by military veterans to help other military veterans and their spouses start and grow their own businesses. The Bunker Labs Seattle chapter opened in Condon Hall just off the University of Washington campus in January 2017 and is just one of our many locations across the country.

Bunker Labs brings together experienced entrepreneurs with veterans new to business ownership who can benefit from the advice of others who have been in their shoes.

“When you transition out of the military, you reset from zero, just as if you are graduating from college,” explains Johannes Schonberg, Executive Director of Bunker Labs Seattle. “We provide a leg up, connecting them with a prearranged network of mentors and peers.”
Bunker Labs unique offering is based on the tight connections veterans have with other veterans, something that can often be hard for civilians to fully understand.

“Within the private sector, there are sometimes stigmas and stereotypes surrounding the veteran experience,” says Schonberg, himself a Navy veteran with 11 years of active duty (and still serving in the Navy reserves). “Veterans are sometimes seen as rigid and inflexible. That couldn’t be further from the truth.”

Military personnel learn extreme teamwork skills and how to work effectively in resource-constrained environments, explains Schonberg. They are expected to complete their missions at all costs, and usually do so in unfamiliar parts of the world. They’ve learned to place their trust in one another, which translates well to a business environment in which communication and teamwork are vital.
“In the private sector, you might start out a little wary,” explains Schonberg. “With veterans, we understand each other’s backgrounds. We automatically trust one another.”

And Bunker Labs offers training that most other organizations don’t. “Most services are centered around the basics of business,” says Schonberg. “They don’t typically help with marketing, social media and networking.”

As the founding sponsor for the Seattle chapter of Bunker Labs, Comcast of Washington provided $100,000 to help build out the 500-square-foot space and launch its programming. This was an unprecedented amount for Comcast to give to a community partner to fully launch their nonprofit — and is a reminder of the strong commitment Comcast has to veterans.

The investment included custom furniture and décor built and designed by local veterans and veteran-owned businesses and provided seed funding for Bunker Labs programs to launch across Washington State. The end result is a collaborative work space where the veteran community can receive the support and training needed to start and grow businesses of their own.

While the hard work of opening Bunker Labs Seattle location may be complete, the relationship is just starting out. As a founding sponsor, Comcast is invested in the success of Bunker Labs and those they serve. “We stand side by side with organizations like Bunker Labs because at Comcast NBC Universal, we believe service matters,” says Diem Ly, Community Investment and External Affairs Director for Comcast. “Together, our work will remove barriers and build opportunities for veterans, empowering them to realize their own entrepreneurial dreams.”

This investment seems to be paying off for Arron Barnes and Life Butta.

Since Barnes discovered Bunker Labs, he has made a number of changes to his business plan. One example is adding single-serve portions of his nut butter to the existing offering of eight-ounce jars.

But what really matters the most is the connections. He says he has received interest in carrying his product from companies such as Nike’s world headquarters. Recently during a Bunker Brews event at Sea-Tac, he met with veterans who connected him with producers of the TV show Shark Tank. The program has expressed an interest in Life Butta and Barnes is waiting to see what comes next.

His hopes are high. “I can very easily see this as a national brand in five years,” Barnes says. 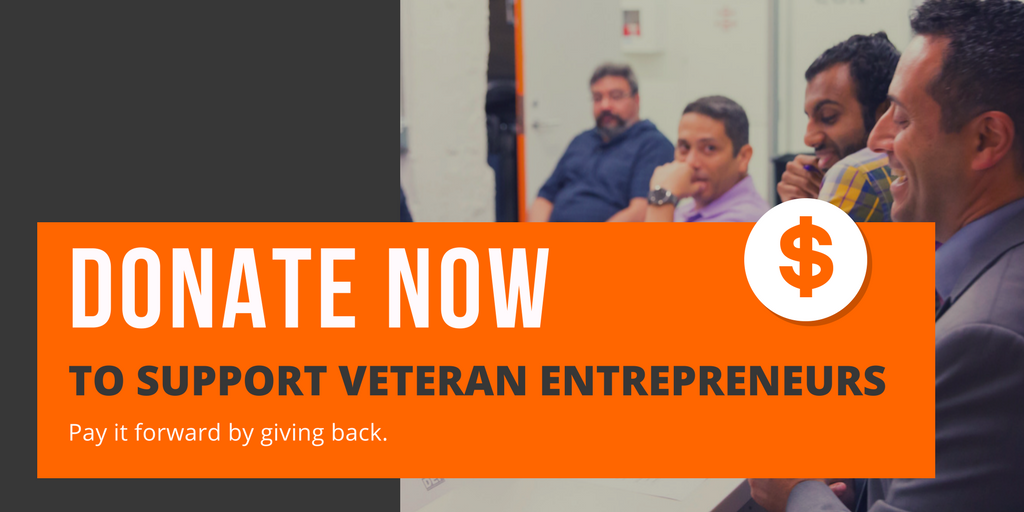 From Founder to CEO: How to Say “No” in Order to Grow

Opinion: Yes vote on I-1000 will increase veteran entrepreneurship